The mentioned stakeholders above assembled on 6 July 2012 at Athlone Stadium in Athlone to discuss the sustained violence perpetrated by gangs with the mind of brokering peace. The dialogue brought together 50 gang members selected from 5 conflicting gangs terrorizing the Gugulethu area for the past two years, resulting to the vandalism of property as well as 20 deaths.

The dialogue was opened by Mr. Luvuyo Zondani Councilor from Ward 38 who took the opportunity to describe the situation created in the communities by this gang conflict. Mrs. Marinki, a member of the Gugulethu community, spoke about the heartbreaking loss of her 18 year old son last year due to gang conflict. She begged the young people to desist from participating gangs. Her speech was followed by former gang member Thando Pikini, who informed the youth that crime does not pay.

After words of welcoming and the inspiring speeches from our partners, Africa Unite explained the purpose of the dialogue and what is expected of them. The dialogue began with the gangs dividing into four groups where they got a chance to discuss the following questions in depth.

1. In nature, why doesn’t a lion eat another lion?
2. What kind of community would you like to live in and see?
3. As leaders, why do you think young people join gangs?
4. What do you think can be done to stop gangs?

They reported their findings to the audience. The other gang members and the community members had the chance to ask clarifying questions and comment.

RECOMMENDATIONS
After the discussions, the following recommendations were agreed upon:

One of the groups presents their findings on what can be done to address the situation in Gugulethu. 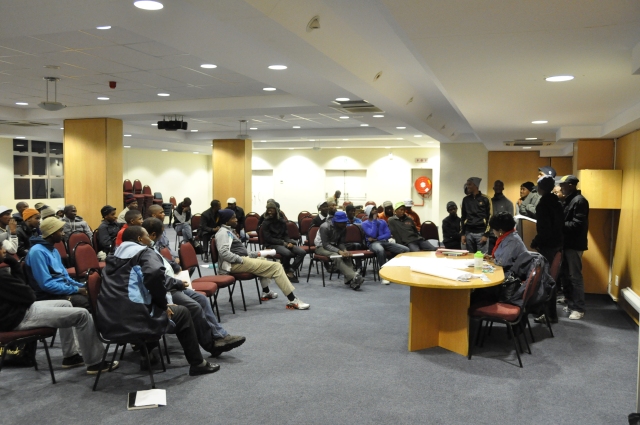 All the gang members listen as one of the groups presents their information.