The purpose of this debate was to allow the learners, and youth in general, the chance to discuss and analyze President Zuma‘s speech and respond to it. The debate focused primarily on issues that concerned them. Education was a main focus they discussed about. All students presented their findings to a panel of experts in the presence of their school’s representatives and community members. The learners were judged accordingly. Later in the year, the learners will be able to monitor the implementation of the programmes arising from the State of Nation with relevant departments and other stakeholders such as local councilors. 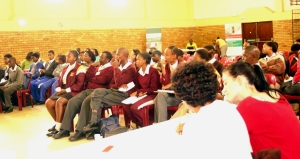 Students were asked to state key aspects about the President’s speech, which included advances in education, green technology and gender inequality. Most students not only addressed the questions correctly, but also showed how strongly-opinionated they were on specific topics. While Sithembele Matiso Secondary School, Fezeka High School and ID Mkize Senior Secondary School tied, the Oscar Mpeta High School were the clear winners. They impressed the jury with their answer on the question of what they would do if they were the president. They had creative and unique ideas, which were still realistic and practical. The principal of Oscar Mpeta High School expressed that Africa Unite should make this annual event with more schools invited. The opening remark was done by Councillor Khaya Zoyi ward 39 and the closing was done by Councillor Luvuyo Zondani from ward 38 both from Sub Council 14.