Africa Unite’s Human Rights for Social Cohesion Programme has used two principal strategies: human rights capacity development for peer educators and the convening of community dialogues. While these strategies have been very successful in contributing to a general climate of human rights awareness, we believe discreet components must be further developed, expanded on and better organized to enable more responsive and effective community interventions. Consequently, and as part of the larger Human Rights and Social Cohesion Programme, Africa Unite has put in place a separate but interlinked project to strengthen organisational and grassroots capacities for the promotion of non-violent strategies for conflict resolution. The newly-envisioned “Community Conflict Mediation Project is within the existing Human Rights for Social Cohesion Programme.

The Community Conflict Mediation Project’s overall goal is to strengthen grassroots capacities to build tolerant, inclusive communities in the Western Cape. The specific objectives are to progressively grow AU’s pool of peer educators with advanced skills in conflict mediation in order to improve the effectiveness of AU’s conflict prevention responses,  engage conflict-affected communities in dialogue in order to reduce community violence and promote respect for diversity, equality and tolerance and to develop a conflict mediation model that can be replicated in other parts of the country. After this training, the peer-educators will be tasked with running their own training workshops and will be called upon to mediate in social conflicts or potentially tense social relations in their respective communities.

Africa Unite held the first workshop on the 5th of April. The workshop started with the following questions: “How does conflict affect my life and work?” and “Do I engage in conflict resolution and how?“ As a start, it was very important for the peer educators to discuss how they as individuals are affected by conflict and how they have tried to address it so far. For better understanding, they had to find a definition of conflict in one group, which then merged to one common definition among all groups.

“Conflict is an interaction between agents – individuals, groups or organizations – where at least one agent perceives incompatibilities between his/her thinking/ideas/perceptions and/or feelings and/or will and that of the other agent/agents and feels restricted by the other’s actions.” 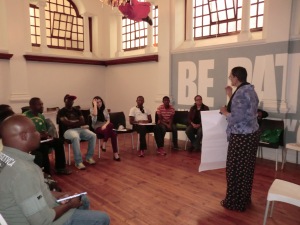 The facilitator of the training, greatly managed to design the workshop varied, but still clearly structured. Through different exercises, games and activities, the peer educators were taught the principles of being an efficient mediator. Activities like “The Gordian Knot” and “Fruit salad” in addition to others helped form the understanding of the topic. The group came to a conclusion throughout the sessions that everyone views conflict differently, based on their own perceptions and experiences. 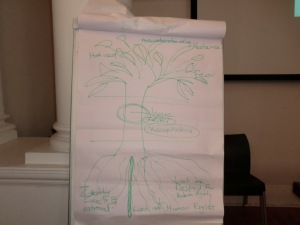 Understanding the difference between positions, interests and needs was a main focus of the second session on the 6th of April. The peer educators identified that it was very important to appeal to the individual or agent’s most fundamental needs, rather than solely addressing their positions. Behind every interest is a need. Generally, all major conflicts are about basic human needs: things that are necessary for their physical and emotional survival. Consequently, basic human needs are non-negotiable. They have to be satisfied under all circumstances. Finally, the third session on the 12th of April focused on community assessment and different ways to map a community.

Through these workshops, Africa Unite raised awareness about the causes and consequences of community conflicts and the importance of resolving conflicts peacefully. The peer educators were provided with the necessary tools to return to their communities and mediate conflicts.