Africa Unite (AU) and Township Youth Movement (TYM) joined in partnership to bring a September School Holiday Program, which consisted of a series of activities, on the dates 23; 24; 25; and 26 September 2013. This initiative was designed in aim of celebrating Heritage month and reflecting on the current social issues faced by the youth globally, especially in townships. The organizers were among four AU Peer Educators, the Singamakhalipha staff and interns, as well as the TYM representatives. The youth in attendance ranged from a maximum of 200 between the ages 13-16 years. The youth are mainly based in the Nyanga and Gugulethu areas, and long standing beneficiaries of the Singamakhalipha programme.

The latest crime statistics show that Nyanga is one of the top townships with extremely high rates of murders and crime with an average of 262 people killed each month, making Nyanga the murder capital in all of South-Africa. In such an environment the vulnerability of the children is at an all time high and during this time we aimed to keep the youth of Nyanga and Gugulethu occupied with positive distractions – this was the driving force for the two organizations when implementing this initiative.

The four day programme started on the 23rd with a Human Rights workshop on rights and responsibilities. Youth were taken back to their roots, so to speak, by revisiting the South African history and how it has impacted on the current social issues. The workshop was facilitated by the Africa Unite Peer Educators.

Secondly, the series continued on Heritage Day, the 24th, with a train trip to the Castle of Good Hope in Cape Town where they toured the castle, and celebrated the diverse cultures of our Nation. Among the honorable guests on the day were the King of the Khoi San and the house of traditional leaders, who was represented by the King and a few chiefs. The King gave us the honor of taking pictures with members of our team 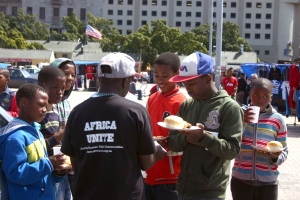 Thirdly, on the 25th the partnership hosted a social dialogue at the Gugulethu Sports Complex. This dialogue focused mainly on youth empowerment and ways on how to be resilient amongst people, and youth of their age.

Finally, the series continued on the 26th with a soccer tournament with a twist – the Kick for Peace Soccer Tournament. The young-stars showcased their talents playing against each other, girls against boy teams were selected and all seemed to be having the world of fun and at the end of the day they were all winners.

We are proud that this opportunity gave the youth and children a sense of hope, fun, and laughter – and what was our goals initially turned into the outcomes, post these events:

The School Holiday program equipped the youth with a sense of self development, the knowledge of leadership skills, as well as inspiration to make wise decisions for them to become responsible adults and peace-makers in their own communities.

A special Thank You, from Africa Unite, to the people/organisations who has continued to make activities of this nature possible at Africa Unite:

For more pictures on the Heritage Day Tour, click here