On the 24th of May Africa Unite children from Singamakalipha programme mainly from the following townships of Gugulethu, Nyanga, Philippi were brought in Delft Township

Girls and boys chase one goal!!

which is 5km away to take part in the street soccer tournament organised by Africa Unite. 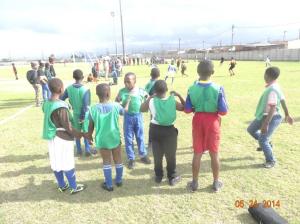 One of the team warming up before they play 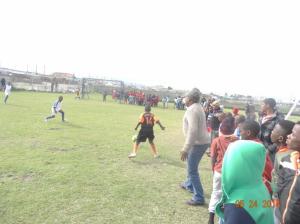 Nine children’s soccer teams (ages of 7-15) took part in this tournament including young girls. The tournament was meant to take the kids away from their communities affected by crime, teen gangsterism, drug abuse, teenage pregnancy, domestic violence etc. The event allowed the kids to be exposed to another environment and eliminated gender stereotypes.
The children were very excited to be part of the tournament including girls as they had a platform to showcase their talents

and skills. At the end of the tournament they had the opportunity to share a common meal

offered by Africa Unite in celebrating their new friendship.

Some of the parents present requested that this can be done regularly as it boosts the moral and confidence of children.