Bring Back our Girls! Young people questioned Peace and Security in Africa.

On the 30th of May Africa Unite had a dialogue with 52 young people from various townships in Cape Town. The dialogue focused on Africa’s peace and security issues especially in relation to the abduction over 200 school girls in Nigeria.

One of the youth engaging with the professor.

The session was led by Professor S. Gukurume from the University of Cape Town and Mary Tal from Whole World Women Association – local organisation.
During the dialogue the following issues were discussed among the youth present:
• Should we celebrate Africa Day or not?
• What is the durable solution to free the abducted girls in Nigeria?
In relation to Celebrating Africa Day, two parallel thoughts emerged amongst the young people present – Yes and No.

The first group opined that it is worth for Africa to celebrate Africa Day for the following reasons:
– Africa is no longer where it was 50 years ago
– More have been achieved although there are still some overlapping challenges
– By celebrating Africa Day, we continually remind our leaders to see that there is more to be done and that they should be accountable
In contrast, the second group felt it was not worth to celebrate Africa Day as:
– Africa is still characterized by corruption, injustices, poverty, gross violation of human rights, poor governance and inequalities at all levels
– Most of the relevant minerals and land are owned by transnational companies. 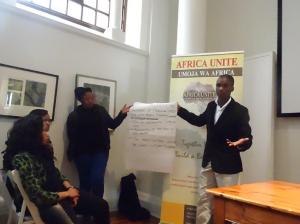 Two of the youth giving feedback of the recommendations.

Regarding the abduction of more than 200 school girls by the Boko Haram terrorists. This issue created more discussion on the floor and three views emerged among the young people.

The first was that the Nigerian government needs to negotiate with the rebels and find alternative ways to destroy Boko Haram as this group started operating since 2009. One of the young participants asked,  ”If among the girls abducted one of them was the daughter of the president or minister, would the Nigerian Government take so long to intervene?”

The second group felt that you cannot negotiate with terrorist groups as their demands are not guaranteed and also that will legitimise their actions thus promoting terrorism.

The third group which was mainly the views expressed by young refugees argued that the intervention of the Western Countries may further exacerbate the plight of the Nigerians because it is another way of taking over a rich oil country – this may take many decades for them to leave Nigeria. On another hand, they condemned the African Union (AU) for not taking any initiative to address this issue.

After this long discussion, the participants were divided in four groups in order to make some recommendations. Even though they did not manage to form a common conclusion on the above topics, below are some of their recommendations:
• Identify and adopt a common working ground for African countries in addressing terrorism
• Tribal and religious tolerance must be emphasised
• Make peace with each other at all costs (all African countries)
• African leaders must called to account in order to have an Effective African Union
• The girls must be released without any conditions in order for them to attend school
• More of these dialogues should be held regularly as it opens the eyes of more young people

After the dialogue, the participants were joined by Africa Unite School Club from Zonnebloem Nest Senior School in Woodstock area to picket in front of Parliament. 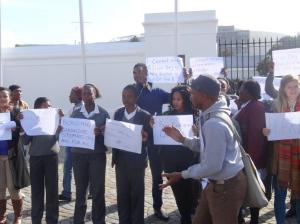 Africa Unite Club school learners picketing with other youth at the parliament.

Both learners and participants raised their banners with different messages in order to appeal to the South African Government to take considerable action on the abduction of the school girls in Nigeria.
Never Again!!!