“My school is my community”

Posted on September 2, 2014 by africaunitesa

On the 30th of August the Executive Committee of the newly established Africa Unite School Clubs (Spes Bona High School, Zonnebloem High School and Pakhama High School) went out for a Cape-city tour. 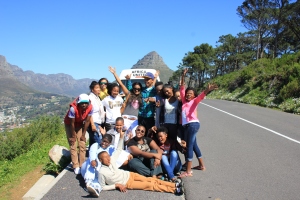 The executive committee consists of the presidents and their ministers who function within their school, which is considered to be their country.

AU organised the tour to bring together the School Club leaders, support their teambuilding and promote the interaction between the different AU-School leaders and Africa Unite.

The tour started by visiting the Castle of Good Hope, then Signal Hill – where they enjoyed the view and the good weather. At Camps Bay Beach, they played soccer and cooled down in the sea. After a great time at the beach all participants took off for lunch at the Waterfront, where the day ended.
The outing was a great and enjoyable opportunity for the executives of the Clubs and the Africa Unite staff to spend time together and become a strong team.

After this great outing, the presidents and ministers of the clubs were motivated and they mentioned that they are now eager to operate and function at their school.