Posted on September 29, 2015 by africaunitesa

From the 25th to 27th September 2015, the United Nations organised the historical Sustainable Development Summit 2015 in New York. During the summit, the World leaders adopted the new development goals, which will have the potential to tackle poverty, inequality and climate change. At the heart of this Agenda 2030 is the set of 17 Sustainable Development Goals (SDGs) and 169 associated targets. The new development agenda builds on the Millennium Development Goals (MDGs) and will serve as the guiding global development framework for the next 15 years. The goals cover all three dimensions of sustainable development such as ending poverty; ensuring healthy lives; ensuring inclusive and equitable quality education; achieving gender equality and empowering all women and girls; conserving and sustainably using the oceans; seas and marine resources for sustainable development and addressing climate change. The theme for this 70th session is “The United Nations at 70 – The Road Ahead for Peace, Security and Human Rights”. 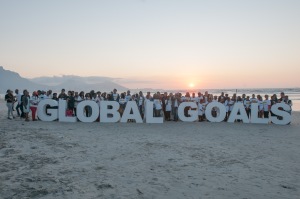 Thus a day before these goals were adopted on the 24th of September as part of the Action2015 Campaign, Africa Unite in partnership with African Monitor, Desert Rose, Lagoon Beach Hotel and the United Nations Association of South Africa (UNASA) joined the global community in order to remind country delegates to make sound resolutions and agreements through committing themselves for the realization of post 2015 development and to ‘Light the Way’ for the SDGs implementation.
More than 200 young people from various backgrounds in Cape Town gathered at the Millerton Beach where they held a variety of lighting devices and instruments such as torches and lights as a symbolic gesture to join the call for the global leaders to light the way for a better future and also to show that we will be observing the leaders for the commitments made
This was then followed by a speech by Bishop Geoff Davis at the Lagoon Beach Hotel where he spoke about the importance of this global agenda and how all stakeholders including faith based institutions should commit themselves to proper implementation of these goals. The City of Cape Town representative who 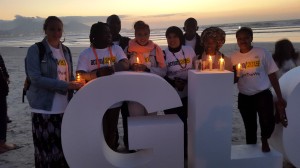 Some of the youth with candles lighting the way.

spoke on behalf of the Mayor also assured the young people present that the City of Cape Town has already put plans in place to make sure that these SDGs are localised within the province and they were open to partnering with civil society institutions during the implementation process.
After these important deliberations, Desert Rose (the only musicians invited, as part of a global interfaith campaign, to perform at the annual COP-global climate change events) who are widely regarded as leaders in producing and performing multilingual sacred world music which includes Sanskrit, Arabic, Aramaic, Xhosa, Latin, Hebrew, Sumerian and English, set the crowed alight with a scintillating live music performance. This was the last act of the night as the global community waited for the dawn of a new global development framework. 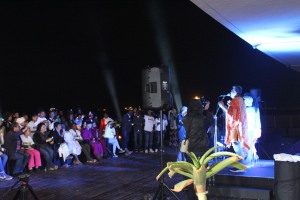 Desert Rose performing for the crowd at the Lagoon Beach Hotel.

With the SDGs, the international community is now the custodian of a much more sophisticated framework. This new framework recognises the need to address the economic, social, and environmental dimensions of development. The new goals are also universal, and should be embraced by countries at all levels of development — including Organisation for Economic Co-operation and Development (OECD) countries. Never before has it been so clear that we all share common risks, threats, hopes, and ambitions.