On the 4th – 6th of July 2015, Africa Unite in partnership with CHUMA and the Cape Town Holocaust Center held its second annual Anti-Xenophobia Youth Dialogue at the Monwabisi Beach Resort in Khayelitsha.

Member of the National Parliament of the Republic of South Africa Honorable Bongani, K. Mkongi delivering his speech to the youth

During the 3 days various guest speakers came in to interact with the youth s as follows, (i) Deputy Minister of International Relations and Cooperation, Ms. Nomaindiya Mfeketo, (ii) Member of the National Parliament of the Republic of South Africa Honorable Bongani, K. Mkongi, (iii) Department of Home Affairs representative (iv) Mr. Sihle Mthinyane and Advocate Penelope Magona, an Advocate at the Cape Town High Court.

On the first day, Michal Singer from the Cape Town Holocaust Center facilitated the first day session where she introduced the history of the Holocaust in a South African context and explored concepts relating to prejudice, racism, discrimination, propaganda, homophobia, Anti-Semitism, and the general war narrative.

On the second day, Africa Unite along with the Dept. of Home Affairs split the day into two sessions. In the first session, Africa Unite held an interactive human rights information session focused on the principles, categories, and limitations of human rights. The Dept. of Home Affairs took the second session focusing on individual rights of migrants and refugees, and the impact of xenophobia as a hindrance for advancing a culture of human rights. Following the two presentations, the youth were then divided into five groups representing the following African countries: (Democratic Republic of Congo, South Africa, Zimbabwe, Swaziland, and Somalia). The five groups were tasked to develop mechanisms to roll back xenophobia in their respective countries in order to promote Africa Agenda 2063 as a form of presentation to the mock African Union panel. 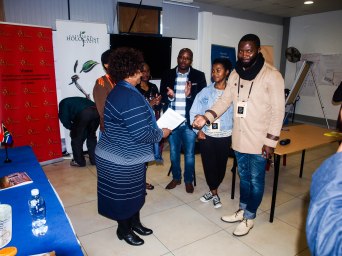 Youth handing over the resolution to the deputy minister

On the last day, the groups made their presentations to the panel of judges made up of the Deputy Minister of International Relations and Cooperation, the Cape Town Holocaust Center, CHUMA and Africa. The youth showcased their level of research on the topic and made different recommendations. However, the judges announced the best presentation of the 5 groups, which was the Democratic Republic of Congo.

In order to have a final working document the 5 groups worked together and developed the final 19 recommendations. These recommendations were read to the audience and handed over to the deputy minister Hon. Ms. Nomaindiya Mfeketo. After receiving the youth resolutions the deputy minister gave an enlightening speech where she emphasised on the importance of young people understanding the history of Africa in

Group photo after the training

detail. She mentioned that in South Africa, there was no major emphasis on knowing the history of Africa and it forms part of the reasons why we continue to see xenophobic related violence in many townships. She mentioned that the points listed in the resolutions were critical and she would like various government departments to get this, because this is a fundamental highway in promoting the aspirations of Agenda 2063

The office of the international relations was very impressed with the level of participation and engagement during the presentations. They then proposed that this summit should be rolled out in other provinces of South Africa, because many young people are not aware or do not have the same opportunity to engage on this issues on all levels of the society.

All the youth were thankful to the organizers for creating a safe space where they could debate their issues without fear or favor and most importantly engaging with various government and national leaders on such critical and sensitive topics.