Leave No One Behind – Dialogue

Posted on November 2, 2016 by africaunitesa

On the 27th of October 2016, Africa Unite in partnership with African Monitor held a ‘Leave No One Behind’ (LNB) Dialogue on the implementation of United Nations Agenda 2030 for Sustainable Development Goals (SDGs). This dialogue is part of the global campaign to strengthen the voices of marginalised and excluded people whatever their background, so that they can use the Sustainable Development Goals and the LNB agenda to challenge social barriers and hold decision-makers to account. 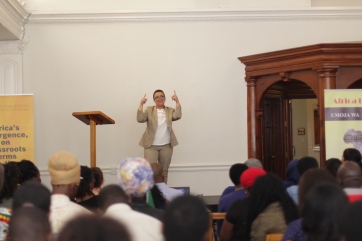 The opening remarks were done by Honorable Mrs Newhoudt-Druchen, Alternate Member of Portfolio Committee on Public Service and Administration, as well as Performance Monitoring and Evaluation; Member of Portfolio Committee on Communications; Her speech was delivered in sign language alongside her interpreter. She largely encouraged all the marginalized groups present to stand up and raise their voices. 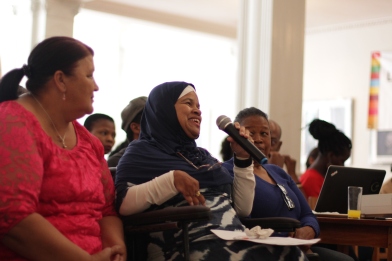 One of the participants from Cape Town Association for the Physically Disabled (CTAPD) asking the Member of Parliament a question.

She gave her own testimony as a woman from a disadvantaged community who was deaf at an early age but managed to overcome many challenges and discrimination and ended up completing her University and even becoming the first deaf woman to be elected a Member of Parliament in South Africa. She mentioned that her role in parliament is to constantly make sure that the voices of marginalized people are taken in consideration in developing inclusive policies which need to be implemented by government. She mentioned that she is available for any follow up on the recommendations made during this dialogue. 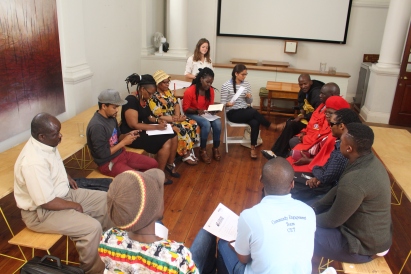 The participants were then divided in 3 working groups in order to identify and discuss their challenges and make some recommendations for follow up. Since this dialogue in Western Cape was held simultaneously in Gauteng and Free State Provinces as part of the Leave No One Behind campaign in South Africa, all the challenges and recommendations will be  compiled and discussed during the final national dialogue before handing over to the National Government. Furthermore, the Leave No One Behind partnership is conducting consultation dialogues in other 30 countries where all voices collected will be submitted to the United Nations.