In celebration of Human Rights Month, Africa Unite in partnership with the Delft South Africa Police Services (SAPS) hosted a basketball tournament at the Delft South Recreational Hall on the 18th of March. The event was themed “These Hands Don’t Hurt”, as the main purpose of the day was to convey the idea that the same hands used to destroy can be utilized to build a safer, more peaceful, better community.

The “These Hands Don’t Hurt” tournament is a continuation of ongoing involvement in Delft through Africa Unite’s conflict mediation work, as well as a continuation of a broader project initiated by of one of Africa Unite’s refugee peer educators named Melon who has created a multiracial basketball team in Delft. For more than 3 years, he has been teaching basketball to a group of more than 60 young people from this area. His profile is very interesting as he is a role model for the youth and a refugee sharing his skills to uplift local communities, thus fighting the idea that foreign nationals are always a burden for the country. 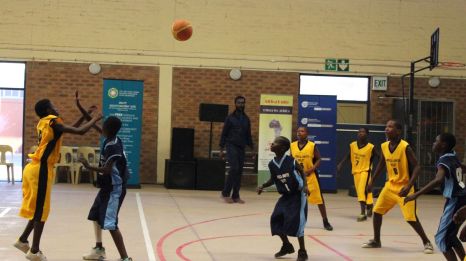 The community of Delft has come into the national spotlight for multiple outbreaks of violence, including the eruption of young people killed at the end of 2016, and most recently for the flare-up of taxi related brutality. Today, Delft is far from a symbol of the unified, peaceful rainbow nation. On the contrary, this part of the city is notorious for its high crime rate, substandard schools, lack of jobs, killing of the police, Bundu courts and eviction embodied by the infamous Blikkiesdorp relocation camp.

The dire socioeconomic conditions affecting especially the youth of this community was the impetus for the “These Hands Don’t Hurt” youth basketball tournament. The event allowed the different stakeholders in attendance such as SAPS, the Enkosi Foundation, the Western Cape government, the Rainbow Arts Organization, Learners Movement of South Africa, the Delft Neighborhood Watch, the South African Red Cross, Matrix, and the Community Policing Forum of Delft to raise awareness around the crime issue in Delft.

The participants of the tournament after receiving metals and trophies

Furthermore, the event was used as a platform to engage with the community on how sporting values, such as tolerance and team spirit, can be used as tools of promoting social cohesion. The event also aimed to rebuild positive relationships amongst the youth and to break down the barriers existing between the different people dwelling in Delft, namely black and coloured South Africans and foreign nationals. In addition, the presence of SAPS at the event allowed the youth to shift from their oftentimes violent confrontation with the police to a more peaceful interaction through sport.

The event was a success, with Coach Ekwanza “Merlin” Mosoko coaching and refereeing 6 different mix gendered youth basketball teams who competed amongst themselves. The halftime entertainment break featured wonderful performances by local talent: an acapella group, vocalist, and Afro DJ. World famous Cape Town rapper Youngsta concluded the event with an intimate, energetic performance and took plenty of selfies with the crowd! At the conclusion of the event, Constable Ruka of the South African Police Services and Mr. Elliot Adonis from the Department of Community Safety passed out metals to all the participants and presented trophies to the winning teams.  Although all the youth who participated took home medals, the maroon team got to take home the biggest trophy of the day for coming in first place.

We want to give a big thank you to all the stakeholders in attendance, with special thanks to our guest speaker Mr. Elliot from the Department of Community Safety and to Youngsta for an amazing performance. Congratulations to all the teams for your hard work and good sportsmanship! To see more pictures from the “These Hands Don’t Hurt” tournament, click here.