On the 13th of April 2017, Africa Unite’s youth peer educators and interns took part in a workshop organised by the Western Cape Provincial Parliament led by Mrs. Irma De Lange, the Public Education and Outreach Officer for Parliament.  The objective of this workshop was to familiarise the youth with the functions of  the Provincial Parliament and help them in understanding the constitution, as well as to teach them on how to effectively utilize the tools of petitioning and submissions. Armed with this knowledge, our peer educators will be able to act as active citizens, share the information in their respective communities and draw the parliament’s attention on specific issues for change.

How does the Western Cape Provincial Parliament work? 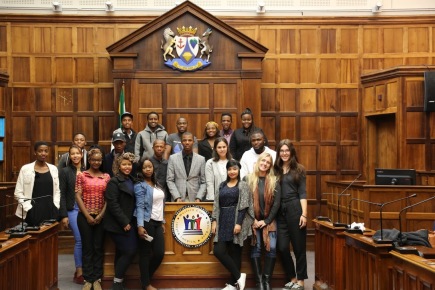 The Western Cape Provincial Parliament makes laws for the Western Cape. Unlike the National Parliament, it has only one House composed of 42 members, whose composition changes every 5 years with elections. The Premier is elected by the parliament and is the equivalence of the President of the province.

The parliamentarians, even though they are representative of different political parties, gather to form apolitical committees.

Each committee is responsible for a department, for example the Department of Transportation. The debates in  Parliament are often the final step after a committee has  met and discussed a specific subject.

How can citizens contribute to the work done by the Provincial Parliament?

The interns and peer educators in attendance  at the workshop learned that at the very least, the public is able to attend debates in Parliament every Thursday in the public gallery. However, every day citizens are not allowed to take part in the actual debate. If someone in the public gallery disturbs the debate, they can be “escorted” out by the security guards.  National meetings can be closed to the public when it comes to sensative issues, such as national security, but this is not usually the case with provincial parliament. 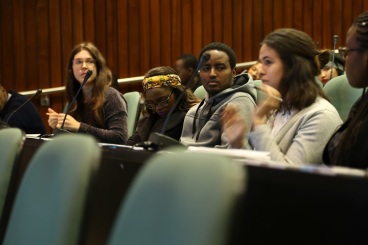 AU interns and peer educators participating in the workshop

We, as active citizens, can also attend committee meetings that allow any South African citizen to add their input or raise awareness about issues they are facing in their communities. There are two ways to participate in committee meetings: a committee can invite people to take part and share their input about a specific topic, or a written submission to a committee can be made. The committee has the obligation to answer. Individuals can also raise attention to an issue in their community through petitioning, which Parliament must legally respond to under the Petition Act.

How does one send a submission or a petition to the Provincial Parliament?

Petitions and submissions are tools an active citizen needs in their arsenal when it comes to resolving issues plaguing local communities. Petitions are more difficult, in that they require many signatures and adherence to many formalities. Submissions are a bit more accessible to the average citizen, especially when they follow the 5 – point system Mrs. De Lange laid out:

Learning about the submission process

The learners were also provided with the following helpful links:

The South-African Constitution (To get a hard copy of the constitution, you can also contact the CGIS), Understanding democracy, and Making a submission

The workshop was a great experience for the learners, interns, and educators. They will be able to apply the knowledge gained during the workshop to help make their community outreach and education sessions more impactful. Thank you to the Western Cape Provincial Parliament and Mrs. Irma De Lange for the fun and informative day!

You can also check out our link to Facebook for more pictures of the day here: