Learners engaged in a workshop about the definition of gender.

What is a gender just society? How can we create it? These were among some of the questions tackled during Africa Unite’s School Club’s annual Gender Based Violence (GBV) workshop held on March 10th at the Africa Unite Offices. Africa Unite, Activate!and the Institute for Justice and Reconciliation came together to facilitate a GBV workshop with four schools from across Cape Town.  This event allowed Learners to have meaningful conversations about gender, what gender-based violence means to them, and what they can do within their schools to promote a gender just society. The purpose of this event was to unpack the term “gender” and cultivate a deeper understanding of the topic in order to promote understanding, tolerance and respect.

Learners were able to converse about the difference between sex and gender and were given room to discuss their understanding of different gender-based terms and concepts. Intentional conversation about the construct and fluidity of gender was had and students offered valuable input to help the entire group grapple with the complexity of gender. 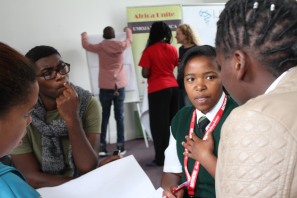 Learners broke into small groups to discuss what they believe a gender just society would look like.

Following this, the Learners were asked an open-ended question about their understanding of “gender-based violence”. Students named physical acts like “bullying”, “sexual abuse” and “domestic abuse”. Learners also recognized that abuse can consist of “emotional and verbal abuse”, “being excluded from spaces because of your gender”, “abusing power over others” and “being forced to act differently than how you feel” which can lead to “self harm or anger”. The facilitators also discussed the issue of economic abuse and the exploitation that occurs at the hands of economic dependence.

A highlight of the event was the small group conversations that were held in teams of five. Here the Learners were able to discuss what they believed a gender just society would look like. 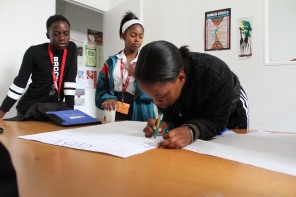 Learners discussed GBV with members from others school clubs

The Learners mentioned the ability for men and women to hold the same power positions, for no person to be sexual abused or exploited, for all people to be accepted regardless of their sexuality or their gender and for all spaces and occupations and communities to be inclusive to all regardless of gender or appearance.

To end the workshop, Learners were given the opportunity to discuss what they will take away from their workshop attendance. Many learners mentioned that they now feel better equipped to understand and respect all genders and people. 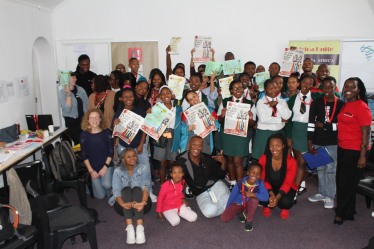 Thank you to all who left the learners smiling at the end of their workshop!

Learners noted their improved understanding of gender and GBV and their inspired commitment to solve GBV issues in their own community. In light of this project’s success, Africa Unite would like to extend thanks to Activate!, the Institute for Justice and Reconciliation and the Learners from Nelson Mandela High, Portland High, Rosendaal High and Heideveld High. For more photos, please click here.