Gender based violence is a phenomenon that is prevalent in today’s society and is deeply rooted in gender inequality which continues to be a serious violation of human rights. This concept can be best defined as violence perpetuated on a person because of their gender and it can be physical, emotional, sexual etcetera.

South Africa is considered one of the rape capitals in the world with victims being mostly women, girls and the LGBTQI+ community.  A number of rape and assaults have been reported in universities but there is also a significant amount of cases not reported on campuses. Due to only some cases being reported to the police it is difficult to understand how serious the issue of gender based violence truly is at universities.

Africa Unite has been involved with multiple dialogues about gender based violence but this one was specific to gender violence among higher education institutions. The purpose of this dialogue was to discuss the issue of how and why universities do not address gender based violence enough for the people to be aware of it on their own campuses. Ultimately, the discussion was to lead the students to coming up with solutions about how to combat the problem and future implementation plans.

The issues raised by the participants during the dialogue about why gender based violence occurs were: 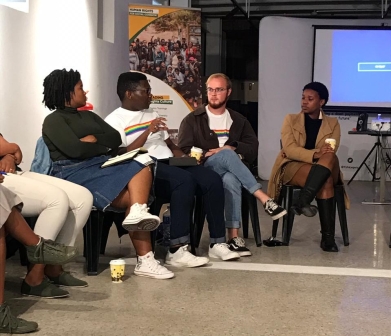 After a long and open conversation between everyone several solutions were proposed to help stop gender based violence at universities: