Since the inception of Africa Unite, grassroots informed interventions have been part of the Africa Unite practice with the youth being at the centre of the interventions. The key strategy for the human rights of social cohesion is capacity development for human rights peer educators and hosting community dialogues. 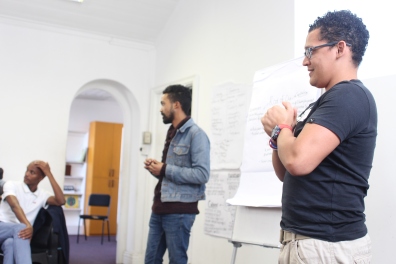 Participants presenting the root causes of our problems

All human rights peer educators are upskilled to be able to effectively spread the culture of human rights across communities, as a result, and as part of the larger Human Rights and Social Cohesion Programme, Africa Unite has put a separate but interlinked project in place to strengthen organisational and grassroots capacities for the promotion of non-violent strategies for conflict resolution. After this training, the peer-educators will be tasked with starting the process of conflict mediation and will be called upon to mediate in social conflicts or potentially tense social relations in their respective communities.

Africa Unite held the 2019 Cohort training on the 4th and 5th of May 2019. As the workshop proceeded one of the initial questions were the rules of engagement in any conversation going forward, this led the participants to investigate the importance of listening and asking questions in their respective groups and outside. This is a very critical element of both community engagement and conflict intervention strategy. Communication is a key aspect in this respect and is essential to mediation and dialogue in general as misunderstanding can fuel the stages of conflict.

As the Worksop continued the participants were asked to discuss the state of any area, community or place that is in conflict and to look at the elements that exist in that conflict.

Participants profiled those community according to the factors that affect those communities and how they contribute to crime. These factors included social, historical, political, cultural and economic factors. The participants made an analysis of the factors from the international, national and regional spheres. Their analysis did not only state which factors affect those communities but also included some of the areas where the potential for conflict existed as a result of the state. The facilitator greatly managed to design the workshop to flow freely, but still clearly structured. Through different exercises, games and activities, the peer educators were taught the principles of being an efficient mediator. The group concluded throughout the sessions that everyone views conflict differently, based on their own perceptions and experiences.

The workshop is also a tool to raise awareness, which Africa Unite uses to sensitize human rights peer educators to the nature of conflict and other characteristics of conflict. This then further increases awareness about what causes conflict and the result of unmanaged conflict and why it is critical to developing strategies to manage and resolve conflict peacefully. All peer educators were well empowered with the necessary tools to go back to their communities and implement their training.

The training covered numerous topics that form part of the tools needed to begin the conflict intervention process. The training engaged participants about one of the critical elements of intervening or mediating any conflict which is listening to the affected parties and asking questions. Participants thoroughly discussed the importance of listening and questioning. The human rights peer educators reached a conclusion that these two are important because listening as a skill helps to deepen understanding, to remove stereotypical barriers and improving perspective. While question helps to improve interaction, clarity, eliminate assumptions, ambiguity and provide clarity and confidence. The facilitator further emphasized these tools through the Action Learning Cycle and other similar tools.

After engaging on the nature of conflict and its elements, the facilitator introduced the topic of factors that cause or make conflict more susceptible in communities through a group discussion among participants. The participants were asked to investigate the social, political, economic and cultural issues emerging in our communities. They mention economic issues as such as unemployment, lack of business opportunities and the failing capitalist systems including other issues such as political leaders propagating theoretical utopian ideas that are not adjusted to real-world situations resulting in a failure of delivery and promises.

At the end of the workshop, the participants concluded by exchanging tools and strategies required to begin the conflict intervention process. These tools include stakeholder relationship, community profiling and analysis of communities and how to engage in the conflict prevention process.