Posted on December 15, 2014 by africaunitesa

Africa Unite in partnership with African Monitor held a flash mob on the 11th of December 2014 at the Grand Parade and Church Square in Cape Town. The purpose of the flash mob was to raise awareness on illicit financial flow in South Africa. 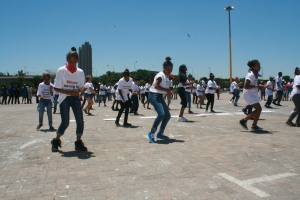 The Young dancers performing at the Grand Parade.

Illicit financial flows are broadly defined as all unrecorded private financial outflows involving capital that is illegally earned, transferred, or utilized, generally used by residents to accumulate foreign assets in contravention of applicable capital controls and regulatory frameworks.
Illicit financial flows are a massive problem impacting Africa in general and in particular South Africa, and requires urgent attention. Such flows involve money that is illegally earned, transferred or utilised. Illicit financial flows range from trade in drugs, trade mis-invoicing, corporate malpractices, use of tax havens and aggressive transfer pricing, among others.
South Africa is heavily affected by illicit financial outflows, according to data released by Global Financial Integrity-between 2002 and 2011, South Africa lost a cumulative R1, 007 billion to illicit outflows.

Some of the audiences writing their views on the banner.

Africa Unite and African Monitor mobilised young people from different backgrounds who had the opportunity to showcase their talents in dancing. During the flash mob, the youth were wearing t-shirts and holding banners with different slogans indicating how illicit financial flow is affecting South Africa.
The public were also invited to write their views on the big banners which were displayed during the entire event. Young people went around to the audience present and asked the following questions:
• What can South Africa do with R200 billion per year?
• What do you think need to be done to address this issue of illicit financial flows?
• Is this campaign useful to you? 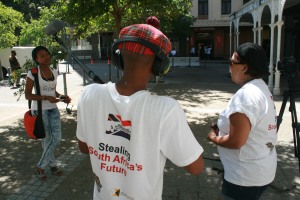 One of the youth from the audiences being interviewed.

The event attracted more people from all walks of life who made different comments in relation to the above questions. The media was also present mainly Cape Times and Cape Towner newspapers. Bush Radio and Cape Talk FM followed up with our event through telephone interviews with Africa Unite and African Monitor.
Due to the success of this event, Africa Unite and African Monitor are intending 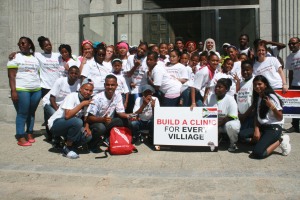 The youth flash mob team pause for a group photo at the Church Square.

to have more of these campaigns on illicit financial flows at national level.