Posted on March 7, 2015 by africaunitesa

Africa Unite in partnership with the University of Connecticut held its annual Human Rights Training Weekend on Friday the 27th of February to Sunday the 1st of March 2015 at Goedegedacht Farm in Malmesbury Cape Town, South Africa. Following last year’s training, that saw Africa Unite bring six (6) young exchange students from Tanzania, Swaziland and Zimbabwe as part of the Africa Exchange program, this year we continued the tradition and received a total of four (4) young people, two respectively from the following countries:

Vincent Williams in the middle facilitating one of the activities

Kenya and Zambia, the young interns are part of Africa Unite Exchange Programme which intends to bring more young people from other African Countries to attend its Annual Human Rights Peer Educators training.

The four joined fifteen local youth peer educators that were selected by Africa Unite and seventeen other students from the University of Connecticut in USA. Overaly the training then was attended by youth from Burundi, Holland, Kenya, Republic Of Zambia Somalia, South Africa, and United States. of America participated in the weekend. The training covered the following topics:
• Human Rights Principles
• Human Rights Education: What and Why?
• Building Human Rights Communities
• Building Blocks for Human Rights Education
• The Rights Of Refugees and Migrants
• Facilitation Skills

One of the highlight of the weekend was the Model United Nations. The Youths were placed into four random groups with price money of 2 billion rand where they chose an African country to represent. Each country was asked to select a president and the president’s cabinet. This resulted in the following four countries being selected: Kenya Republic of Zambia, Somalia and Zimbabwe.

Each country was supposed to present a speech to the first African Secretary General of the United Nations, Kofi Anan. As a tradition of Africa Unite, the youngest of the group is the one who was selected as the Secretary General. His name was Jordan Carelse who is a Grade 11 student i Cape Town. The President and Cabinet of each country highlighted the following aspects:
• A brief History about the country
• The current Political issues
• The Socio-economic dynamic and
• The Cultural dynamic
The winning country was selected by a panel that was composed of the Secretary General and the President of the World Bank. 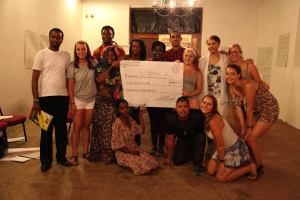 Somali team walked away with the cheque.

The criterion was based on team work, knowledge of the country’s progress and how they were going to utilise the money to help the country achieve its Millennium Developmental Goals. Somalia was selected as the best of the evening and won a mock check of 2 billion US dollars for aid to their country

After the training the peer educators are then expected to go back and run similar human rights sessions in their respective communities and countries.
After the workshop, the youth from different backgrounds were very excited for the different level of interactions, content of the training and the skills which were gained during this weekend. They gave constructive feedback and thanked Africa Unite for this opportunity given to them. Africa Unite, would like to use this opportunity to thank DKA

Group photo of the young people after the training

for funding and Marita Mc Comiskey for facilitating this partnership with Africa Unite.