Posted on October 16, 2018 by kat3hy
On Saturday, 13th of October, we hosted our Whose Day Zero feedback event, the culmination of a year’s worth of work and dialogues. We worked with Africa Unite’s School Clubs to enable young learners to conduct baseline research with a population group of their peers by administering a survey about water restrictions and the impact on their communities.

Africa Unite interns, Kathy and Kate, starting off the day with an overview of the agenda

Africa Unite’s Brilliant, doing an ice-breaker with the learners
At this event, we presented the findings from this learner-collected data.  The surveys were intended to enable the learners to gain a better understanding and awareness of the water crisis, the challenges our School Clubs face during water restrictions, and if these challenges vary in different parts of Cape Town.
The media has latched onto the concept of “Day Zero”, the day the municipal water source will be turned off to all domestic dwellings. The reporting of the water crisis has left the rest of the world wondering how an entire coastal city has run out of water, in what feels like overnight. Cape Town has been under threat of drought, poor consumption patterns, and reduced rainfall since 2015, so why is the media only this year reporting on the water crisis? This is the question that Africa Unite hoped to uncover with the surveys that our School Clubs conducted. Cape Town has experienced 3 low rainfall years in a row; rainfall in 2017 was the lowest rainfall recorded in the last 100 years.

Dam storage capacity has almost doubled since this time in 2017. Cape Town’s supply dams have just moved beyond the City’s defined “danger zone“ (65%) as the recent rains and continued efforts to save water have raised the combined water level to 76.2% of storage capacity as of the 8th of October 2018.

There are 6 main dams supplying the Western Cape, and Theewaterskloof (the main source of Cape Town’s water) is one of the most affected dams. Climate change experts predict that this is not a once-off occurrence, and that this is not the first Day Zero for Cape Town. Although we have avoided running out of water for now, there are fewer wetter years and more drier years awaiting us in Cape Town. 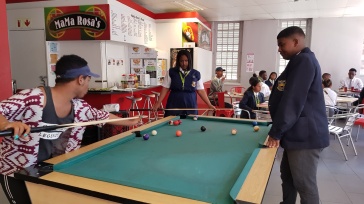 We were thrilled to have Edmond Tiku and Donavan Williams from The City of Cape Town’s Department of Water and Sanitation at the event, to tell the learners more about the Water Crisis and how to move beyond the shortage in a sustainable manner.

There was enthusiastic engagement in the dialogue between Africa Unite, the City of Cape Town’s Department of Water & Sanitation and the learners. We would also like to thank our generous funders, Wakefield Rotary USA, for the opportunity to host this event. It was an enriching day for all involved.

For more photos from the day, see our album on our Facebook page here.

Donavan Williams of the Dept of Water & Sanitation, with the water-saving mascot Manzi