On Wednesday June 7th, while most people were hunkered down in their homes enduing the wrath of one of the worst storms to hit Cape Town in decades, Africa Unite teamed up with the South African Red Cross to help with disaster relief.

During the course of the storm, 8 people were killed, 135 schools were damaged, and thousands of people were left homeless after gale force winds and extreme flooding pounded the outskirts of Cape Town.

Africa Unite interns and peer educators gathered in the morning of the storm at the Red Cross warehouse in Wynberg to prepare food packages, with non-perishable items such as flour, sugar, maize meal, soya mince, peanut butter, jam, and tea. An intern with a background in meteorology also assisted the Red Cross with storm prediction and assessment, to help predict what areas were going to be hit the hardest. 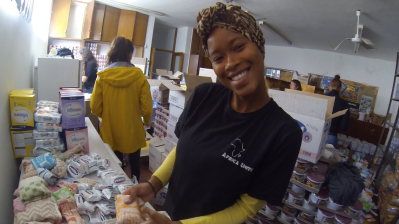 After preparing and loading the supplies, the team then traveled to the community of Makassar, which suffered greatly during the storm.  The team met with the community leader and dropped off over 100 parcels of food, men and women’s hygiene products, baby supplies (including food, diapers, and soap), and blankets. The community leader dispursed the emergency aid packs throughout the night to affected families.

Busy at work at the Red Cross warehouse in Wynburg

AU intern Luuk Hootsen said of the day’s events, “It was a heavy day, but very fulfilling. I gained so much respect for the Red Cross. After a 12-hour day of work, most of the work was done. We went home but a lot of the people from Red Cross worked throughout the night.”

A big thank you to the South African Red Cross for all their work in disaster relief from the storm; the affected communities are in the thoughts of Africa Unite.